Meeting up to talk business

Meeting up to talk business

It wasn't like she had much to do these days, but she still had her entire outfit to create and the whole village's constant changing, lack of central authority and plain disarray didn't exactly make things easier. However, there was one thing which did go right, Yomi had gotten the idea of finding herself an investor to open up a store and allow for a better and more practical cashflow. After all, no matter how smart and practical she was, it wouldn't make her a dime without having a better way to attract customers.

It was for this reason that she found herself at the Hozuki clan district, awestruck by the many types of fish and types of fishfoods the hozukis actually sold, almost drooling at the thought of going home with a few pounds of smoked mackerel. They were one of the richest clans in Kirigakure, so obviously the best place to find herself a suitable investor for all her crafts and ideas.
H2 the O 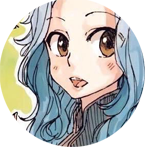 Nami quietly strolls along the innards of the Hozuki Clan District, hands empty at her sides with her arms swaying back and forth as she moves along. Her hair's pulled back as per usual, this time with a red bandana, paired with a bright red sweater. A black skirt and simple pantyhose accentuate the respective accessory and sweater, as well the small, lace-less red shoes she's wearing. Uniquely enough, she's wearing a pair of glasses with a red frame to go along with this outfit of hers, though she does not necessarily require them in spite of this. The Hozuki's just about to finish her bored pace through the district until she notices a woman at the front gates.

Being much more of an indoors-y type and not really bothering to ever get out of her home unless it's for supplies or the occasional personal errand, the blue-haired Hozuki, surprisingly enough, doesn't recognize her. None the less, with her usual bubbly attitude and unnaturally energetic persona, Nami strolls toward the female, smiling warmly.

"I take it you're here for something miss? Maybe for Tetsuya-san? Unfortunately he's out right now, but I can try to pass a message." She offers politely.
Halcyon Yomi

Yomi nearly punched a certain girl by accident, as she practically jumped a few feet in the air when suddenly being spoken to by some random young woman out of nowhere. "Hmm...what the OOOH what?!?" It was a rare occassion to see Yomi being startled and flabbergasted by a random stranger, holding her hands up in a weird stance of surprise and self protection, only to lower them when realizing she wasn't under attack or under any threat. "Sheesh, you scared the heebiejeebies out of me."

Taking a closer look, The jounin wondered why the girl actually all of a sudden spoke to her, but disregarded it as probably just an act of courtesy and general friendliness. Though she had no idea who the girl was and from which clan she hailed, the Jounin couldn't refrain from giving a slight bow to respond to the courtesy in the form of a somewhat formal greeting. "I do not know who this Tetsuya may be...I only came here for two things: tasty smoked Mackerel..." Already licking her lips at the very thought of the mouthwatering treat of saltiness, Yomi nearly forgot to finish her sentence. "Oh right and to find a few things for my own... financial stability and expertise."
H2 the O

Nami blinks as the female overreacts, ultimately left looking a little confused. She hadn't meant to scare her like that. "---Ah, sorry. I was just curious, is all." The Hozuki elaborates politely, still wearing a genuine smile upon her facial features. She hadn't seen the woman before so she assumed that she was just a visitor, and judging by the brief bow, as well as her explanation, she was indeed one. The female chuckles a bit at the responset o Tetsuya and then the mention of fish, though her interest is piqued by the mention of finances.

"Well, Tetsuya's the Clan Leader... but he's also the Water Daimyo. Our mackerel isn't that pricey so you can probably get some if you want---buuut.. finances? From the looks of it you're a shinobi, but I take it the usual salary isn't cutting it for wherever you might be meaning to get?" She inquires curiously. By the sounds of it she wanted some sort of ulterior source of money, which was something Nami could get sorted out. With the right price at least.
Halcyon Yomi

So, it seemed that within the Hozuki clan they were on first name basis with the Water Daimyo, though Yomi had no idea the Daimyo was an actual member of the clan, far as she knew all nation's feudal lords were but weak and decadent figureheads of the true power within, usually the greater shinobi villages themselves. However, if this wasn't the case with this Daimyo, it would be a very surprising and very refreshing thought to have someone more...in to the know at the top of the pecking order. "I see, if this person you mention is indeed the Daimyo of the Land of Water, it's not strange for me to not know more than but the title itself, right?" Still though, as the stranger did mention that their mackerel was not all that expensive, Yomi was indeed tempted to get herself a decent amount of it.

"I simply need some investment to buy myself a building that can be turned into a store for my own wares," Taking off her backpack , knowing fully well it was smart to at the very least bring some samples. Yomi took out a simple pair of her selfmade Military combat boots, though in quality they perhaps were at the same level as the regular marketplace stuff, they didn't have the crude look those wares usually presented. "These are just some more standardized boots I've made, but I am able to make a lot better stuff if necessary."
H2 the O

Nami offers an acknowledging nod in response to the number of statements, not surprised that people didn't really know the first name of the Water Daimyo, or his affiliation for that matter. Though that aside, the Hozuki finds that her interest hasn't gone to waste at all considering what the female wants to get. Considering it's a shop they're talking about, Nami can actually help with something like that, especially considering that she's an engineer. The main issue regarding that is a matter of if she could make something up to par.

Not that she'd back down on a chance at such a thing.

"I can lend a helping hand with that. I take it this will be what your stock will consist of?" She inquires curiously, gazing at it to get a feel for how up to par it was. It was definitely something worth selling, that's for sure.
Halcyon Yomi

Rather surprised that a single, simple girl from th Hozuki clan just immediately told her she could help her with her idea to find and get herself some investments for a shop or at least with the idea to actually get one, Yomi put her backpack on the ground and put the boots back in, looking up at Nami with a grin on her face. "Oh no, this is just a glimpse of what I'll be able to make," She wasn't lying though, since she was able to make poisons and medicine, craft a variety of enchantments and to make it all even better, she had started to dabble in the idea of truly engineering some marvelous stuff. "If I can get a single store up and running, I'll end up running the nation. Everyone will be wearing my stuff and everyone will else will be wanting it. The moment I get myself a store, I'll be able to invest in the future...and I do love the future."
H2 the O

Nami peers inquisitively at the female when she states that this was just the bare minimum of what she could do. As the female begins to explain her vision and what she has in mind in regard to getting a store, the Hozuki nods her head in an understanding mannerism, smiling brightly. "If that's the case then making a shop would be well worth it. Anything in mind that you want with it or just the standard thing? You can definitely make extra off of just selling your stock alone." She states encouragingly, feeling a little more invested in the idea. No pun intended.
Halcyon Yomi

"Always start small," Yomi believed those words, knowing that it was the ideal way to test and calculate things such as profit and growthrate, to test the actual need for expansion based on progress was the same as her own physical training, only to increase the workload in sync with her actual physical progress. "A simple, nicely located shop, providing quality material will never be beaten by a giant megastore selling junk. The higher the prestige, the higher the value, the higher the value, the greater the name and the greater the name, the easier the expansion."
H2 the O

Nami nods her head with an acknowledging expression, proceeding to reveal a notebook. She opens it to about the middle point and flips to a blank page, beginning to note things down. Sketching out a vague blueprint of the shop, the female notes a few things on the side, such as the dimensions and some interior furnishing to get along with it. Mostly standard things that could be used to decorate the place or put merchandise on. Either way, things like this would be integral to creating what Yomi wanted to sell her belongings at. Nodding more a little bit as the female speaks, Nami finishes up what she had in mind and notes the few functions it would have.

After writing that down she offers the notepad to Yomi, showing her the sketch of the exterior of the shop itself, including the interior.
Halcyon Yomi

It was rather unexpected for Yomi to see the girl suddenly reach for a notebook and start writing and drawing down stuff without any need or request for it being made. All the Jounin could think about was that perhaps the kid had some bout of inspiration wash over her. Nonetheless from the moment the kid had pulled out the notebook, Yomi remained calm and quiet, just curious to see what it could be that had driven Nami to go drawing all of a sudden.

Eventually though, the kid gave the notepad to Yomi to have a look at it, who looked at the result with wide eyes, only to reach out with her hand, pulling a pencil out of her trench coat and modifying a few things on the drawing. "A more open space for the wares to be stalled and a slightly larger storage space might do the trick," She mused while scribbling on the paper, holding it back in front of Nami."Get me this and we'll be talking business."
Halcyon Yomi