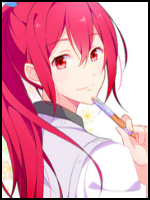 Appearance: Kaori has red hair that falls down to her mid-back. For practicality, she often puts her hair up in either a single ponytail or a braid. A gleaming pair of wide crimson eyes teams with her red hair, giving Kaori's overall appearance a warm touch to it. Even her skin has a light warm touch to it. She stands at 5'2" and is thin, but fit. She does have curves, but they're not as large or defined as other womans'.

As far as clothing goes, Kaori dresses more or less like how most Sunagakure ninjas would. She typically wears natural colors, mostly in shades of brown and sometimes black. She does wear the standard sandals that ninjas all around wear. She will almost always (again, for practicality) wear either shorts or leggings (which normally cut off mid-shin) and a shirt with sleeves that resembles those of a short sleeved kimono's. While most ninjas would wear their forehead protector around their head like it was designed to do, Kaori, like some other ninjas, prefer to wear it in another location. In Kaori's case, around her waist.

History: The Inoue family wasn't known for much. In fact, they just blended in like every other citizen of Suna. Kaori's parents, Hiroshi and Dai Inoue, were simple people who sold some hand-made items. Kaori was expected to carry on the family business and was taught at a young age to sew, making her already skilled with a needle, but she didn't want to craft the same things her mother did. After going by the academy a few times, she grew interested in becoming a ninja. After watching the kids training to become a gennin for a while, Kaori knew that she wanted to become one too. At the very least she would try. When she told her parents, they were a bit surprised. Kaori had never talked about becoming a ninja before, so they asked to make sure that it was something she really wanted to do. Of course, she said that she was in fact really sure and that she had been considering becoming a ninja for a while. So, when the time came, her parents signed her up for the academy.

While at the academy, Kaori learned all the basics a new gennin would have to know. She studied a lot and practiced everything her teacher said to practice, but she would be lying if she said that she wasn't intimidated by the other students who came from families with ninjas or from Suna clans. Being the first person in her family tree to be a ninja made Kaori feel that she was at a somewhat level of disadvantage to the students who already had exposure to jutsus and weapons. However, that also became a motivation for Kaori to surpass the odds and become one of the top students of her class. Although she wasn't the #1 student, she did manage to get up there and impress her teacher a couple times.

Kaori graduated the academy and began to delve deeper into ninjutsu. She was shown to have a certain affinity with the wind element, which was interesting in her opinion. She had always thought that she would be more in tune with fire, but apparently not. As she trained, she realized that she was an average ninjutsu user. There were people that clearly performed better than her and used more impressive jutsus. Just as Kaori was becoming discouraged, her sensei told her that she had better chakra control than most people her age and informed her that it was a skill that would be good for medical ninjutsu. Kaori had to think about it for a moment. She had always been interested in medicine and rare diseases. Her family had a history of them, but thankfully none were passed down to Kaori.

After training as a gennin for a while, Kaori was thrilled when she found out that chūnin exams were coming up. The moment she even heard the rumor that they would be happening sometime soon, she immediately began training harder than ever before. She primarily practiced her ijutsu and ninjutsu, since those would most likely be the most useful things during the trials. Once the exams were over, Kaori was promoted to the chūnin rank and her family couldn’t be happier. She was setting new expectations and meeting new aspirations that the rest of her family didn’t expect. Now, all she has to do is become her family’s first jōnin.

Personality: Kaori generally comes off as a happy person. She almost always displays a smile that is directed to both friends and strangers alike. Although leaning slightly towards being extroverted, Kaori and many others consider her to be an ambivert. She enjoys being around others and goes out more often than the average person, but like everyone, she likes to be alone from time to time.

Kaori is a very studious and academically inclined person. Her great curiosity only enhances the desire to learn. She often spends time researching everything and anything that could help her become a better ninja, especially if it pertains to medicine. While she does do lots of learning and researching, Kaori makes sure to make time for training and a bit of free time.

This Suna ninja is very independent. She knows when she needs help and will accept it from anyone who offers, but not without a bad feeling welling up inside of her. That “bad feeling” is very close to a sense of losing some confidence, but mixed in with bitterness and a bit of anger as well. Although she knows this isn’t the case, Kaori can’t help but feel as if when she asks for help, it’s a sign of weakness, which is a feeling she knows that she needs to work on.

While Kaori very much dislikes getting help, conversely, she’s more than willing to give up some of her time to help out others. When she commits to helping someone out (or committing to anything at that matter) Kaori won’t stop until her work is exemplary. Although she strives for perfection, she knows that it’s impossible to do everything exactly 100% correct.

Kaori has also been known to be a very “go with the flow” kind of person. She is adaptable and accepts change with open arms, so long as it’s for the better. However, if things do take a turn for the worse, she quickly learns to cope with things and tries to make the best out of every situation.

Spoiler:
Kerii was where she would be typically found. She was sitting down on a couch which was postitioned in a corner of the guild hall. She wore her lacrima powered headphones and listened to the music being played through them. A dim yellow light glowed lightly on her face as she was looking up a few things with her archive magic. Specifically, she was researching more uses for her magic. Kerii arched an eyebrow as she saw that her magic was capable of telepathy. She did suppose that magical coding could do a lot of things, but telepathy was just so different than putting up walls of code and sending digital viruses to attack. Kerii decided that she should experiment with this telepathy and see if she was strong enough of a mage to do it. She would do this at another time though.

Even though she was listening to her music, Kerii heard the unmistakable clicking of heels against the floor of the guild hall. Although Kerii already knew who it was, she looked up to see Guild Master Luna Avess, whom Kerii referred to as Master Luna.

Kerii's gaze followed Master Luna’s strides. The rest of the guild seemed to follow suit, as everyone could see that Master Luna was walking to one person in particular. This one person was somebody that most people probably wouldn't recognize. However, Kerii had already met this blonde haired girl. Her name was Tida. As Master Luna began to speak to Tida, the whole guild fell silent. She simply welcomed Tida to the guild with no grand gesture that one would expect from Fairy Tail. Kerii stopped using her magic and took off her lacrima powered headphones. The yellow screen in front of her flickered away as did the information it previously held. She got up from the couch and walked over towards Master Luna and Tida. "So you're officially a member now," Kerii said to Tida, arms crossed across her chest. She gave Tida a little, but still genuine smile. It wasn't much, but Kerii was known to stay quiet and keep to herself, so it shouldn't have been too surprising that Kerii didn't give a warmer welcome then some of the other guild members were probably going to give Tida.

Everything looks great except for one thing.

As a Chuunin you get five skill points to distribute overall. You only have four (one element, three skills.) You have one more to choose, or you can trade it for an additional max stat.
_________________
Strength: D
Constitution: C
Stamina: B
Speed: C++
Coordination: C
Intelligence: B
Perception: C++