King of the Ghost Town 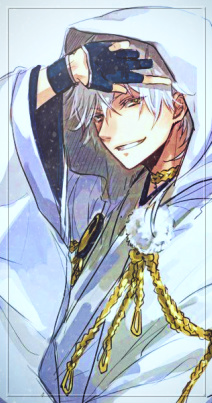 King of the Ghost Town

Other Notes: ---
Haku Whistled as he strolled down the street waving to the worried baker as he wondered down the street. He was worried too, far more than he let on but the only ninja within the village. That cat had gone off her rocker. Haku hadn't been entirely sure about having a cat for his leader when they gave her the position, but he was only a chunin then and was not of place to question really anything the upper brass was doing. Lately however, she'd gone off the deep end. The scrolls containing their jutsu had been stolen, they were invading other lands for some reason or another, and now he was quite literally the only Ninja he knew of in the village. Sure maybe they didn't have anything left to steal, but there were still people here to protect. Families and children that Haku simply smiled at and waved pretending like he alone might be able to handle any threats that might come upon the village right now, especially with their recent acts of aggression but he really couldn't. He had no excused for his kage, he felt ashamed to be a part of this.

He sighed as he walked up the steps to the government building and strolled his way up up to the Kage's office. He was technically acting Kage for the village, especially given that he was the only shinobi in the village. He slumped in the seat and kicked his feet up onto the desk. He found an ink pen and began twittling with it in his hands having nothing else really to do. Eventually he got bored and kicked his feet up onto the desk. He then spotted a trash can a crossed the room, trying to ignore the eerie silence of the village and the office he decided to play a game. He wandered around the room and found 5 separate ink pens. He was going to see if he could make all 5 of them one after another.

This continued for about an hour before Haku managed to stumble upon some bourbon in the bottom of the kage's desk. Initially he thought that maybe he shouldn't, but he quickly recounted that thought and was thankful for it. The next few hours were spent merely downing the entire bottle in different positions, laying on the desk, slumped in the chair, at one point he was even drinking on the roof because honestly who cared? After Haku finished the bottom he sat back in the chair and turned to the the TV and turn it on. replaying the recording from the broadcast once more. Finding himself shouting "Yaaassss bitch tell 'em" to more parts of Nozomi's speech than he thought he might after spending 2 years in a village. He hated this. Konoha had done wrong by so many people and he couldn't stand to watch this anymore. It was at this moment that Haku spotted the official seal of the Hokage, used to write orders and official documents and almost immediately sobered up. He had the seat, and this had to end.

And with that, Haku got scrolls and began writing orders. First and foremost a summons of all Konoha Nin not currently participating the chunin exams or escorting such ninja, proctors included in this, back to the village. This missive would also exclude ninja on certain missions haku deemed important such as ANBU and most A+ assignments. As a part of this all ninja occupying nations other than the land of fire were to withdraw immediately, including Iwagakure and the land of stone.

Next on his task list was the removal of the bounty on Akihiro, and his label as a missing ninja. Instead shifting that bounty and title onto what most would classify as the current standing kage as well as doubling it to 600k and demanding an immediate seizure of her assets.

Which brought Haku to his next missive which would be addressed to the other two kage declaring that the previous kage was unfit for utterly unfit for duty as is exampled by her leaving the village wholly undefended and her rash acts of aggression upon other nations as well as her blatant disregard for the security of village secrets. With these letters written, he'd then seal these letters with the official kage seal.

With the seals in hand he'd head out to the messenger birds of the village sending them out practically en mass. He'd then head over to where the Sandaime Hokage's robe was stashed away and removed the hat from that set putting the Hokage hat on his head. He was going to fix this whole mess.
794 / 794 Words || @tags || Mission Link || Note
♡Ash♡
_________________
「 Not all angels are saviors 」

Re: King of the Ghost Town

Other Notes: ---
You'd be surprised what some people leave behind. Really it's not a lot. the damned cat took just about everything  but some booze, and a lawn chair, and a whole ass city to name a few. Haku had gotten the cat's letters. they were currently burning in an empty trash bin not too far from where he was currently sitting, as he had his feet kicked up on edge of the village wall. If she wanted to announce to the world that she was just as unfit to rule as he had implied she was, then she could certainly go right ahead. She was in the wolves den currently, and that sheep just declared she was the alpha amongst them. He saw that ending smoothly for her. He was going to sit here and wait for that cat's so called renovation crew. She could rip this place and his new hat from his cold dead hands, if she'd even attempt to. He'd need to be six feet under and sealed away in his casket before he say this place fall.

So here he was, the Ghost King watching over his barren castle, just hoping and praying someone would step forward and challenge his claim to this land. Specifically a small cat with an over inflated sense of self worth. He'd love to swipe the smug attitude clean off of her himself, but unfortunately he had a village to defend, and while he might be a kage of 1, he'd still prove he was a better kage than she ever was. He just needed to hope the world heard his words and saw her actions and came to action themselves. She was at the very least a warmonger if not just plain insane. Sure she claimed to be taking a peaceful route now, but she said before hand that her previous warpath was merely a result of temperament, and she conquered four nations in that time. Who was to say what would happen the next time she got a knot in her fur? And she could kiss Haku's ass if she thought what she was doing was freeing Iwa. That was the furthest thing from the truth, it was just a monarch under a cat, A CAT. Not to mention execution was a potential clause for now wearing uniforms and people were expected to worship cats as gods with similar punishments. It was the furtherest thing from freedom and absolutely asinine that Haku was apparently the only one who saw this.

Re: King of the Ghost Town

Other Notes: ---
"Lord Hokage..." Haku sat on the village wall, still in his lawn chair as he watched the next caravan of Konoha ninja. Actual Konoha ninja, not any of those wearing those stupid nekonian empire headbands pass through his gates. Full of their supplies and resources being brought back into their rightful home. He had a small smile on his face as he watched some of the kids who'd thought they'd be leaving their homes behind forever come back through the gates with absolute cheer on there face. This would be one of the last caravans, to return and before the day would be out they would all be home. He wanted to do everything he could for these people for they were his now.

"Lord Hokage!" The boy shouted next to him. Haku startled in his chair, completely forgetting that he had a new title now to address him.  He coughed and turned to the boy. "Apologies, still not used to the title." he'd chuckle a bit before continuing "What did you need from me?" the boy would laugh a bit. "You're needed in the kage's office sir, and forgive me but it might be best to leave the village defense of the gate to others while you attend to more important matters." Haku would chuckle and merely agree with the boy. He knew that the meeting about his inauguration. Haku sighed as he nodded to the boy once more, before descending down the wall, greeting all of the familiar faces and people he'd come to know over the past 2 years in the village. The Mizukage's broadcast had really helped bring people back into the fold, and he'd need to remember to thank her. But his reign as the ghost king of konoha was over. Now his reign as the Godaime Hokage was about to begin.