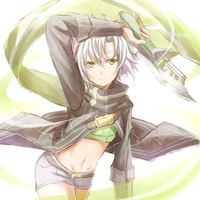 It was strange to the young Genin; being out this late at night is something Asahi is not accustomed to yet. Of course there's always been moments when Asahi would stay up a couple more hours than what his parents allowed. Even so he normally wakes up tired. Not that he's exhausted right now since he hasn't slept yet. It was only recently Asahi ventured out on his first mission and completed it in a short period of time.

Asahi can be found at the training grounds as he takes sitting position next to a tree as a single senbon twirls around his fingers. His gaze lingering over at the clearing where the training dummy and such are located at. The blue hair dancing with the wind as Asahi tries to find anyone to train with. Of course he could always train by himself, but he feels like he would progress faster training with someone else. The problem is who would train with somebody who looks like they're going to wheeze and fall over after sustaining a single attack. Asahi does look a bit frail as he's not strong, but even so the fact that he managed to graduate from the academy should prove something at least.
Current date/time is Wed Feb 26, 2020 4:13 am